View five sets of photographs here. Click the individual images to open up each series. 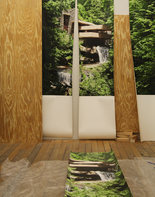 JOB SITE
JOB SITE
This series of images were all shot on the SITE of Frank LLoyd WRIGHT'S house; FALLING WATER.  The house embodies the architects ambition to push the union of nature and arhitecture as far as possible.  The carpenters and restoration crews are working 365 days per year to holding the building together.

A-Frames, which gained popularity in the late 1960’s and 70’s, were sold as prefab kits, available at the local lumberyard for just $3000. The house kits made it possible for a new culture of middle-class ‘Do-It-Yourselfers’ to own vacation homes.

Over the years A-Frames have been customized, renovated, appropriated and are now found housing everything from fast food joints to motorcycle shops. These photographs are part of my ongoing documentation of these changing structures.

Between the years of 1947 and 1951 there were 17,000 identical homes built in Levittown, Long Island. But it was only the 1950 ranch house that came with a television built into the living room wall, underneath the staircase. Over the years the televisions broke down and since the 1950 Admiral was no longer being manufactured, ranch house owners were left with identical ‘Holes’ in their walls.
The challenge of what to do with the ‘Hole’ began to creep up and residents responded with a variety of customized solutions. These photographs document the ‘RANCH ‘50’ TV walls in their current incarnations.

These photographs document a small neighborhood of Ranch Houses in the suburbs of Chicago.
This neighborhood, built in the 1960’s, ten years after Levittown, is a typical ‘second generation’ suburb. Three versions of the new and popular 'split-level ranch' designs are depicted in this series.